For More on Pheromone Research and Products (click here)

Learn About... Hormones and your Health:The Smart Woman's Guide to Hormonal and Alternative Therapies for Menopause.

The Public Library of Science - In September, 2020 PLOS published Dr. Cutler’s coauthored findings that 94% of pre and postmenopausal women with no prior diagnosis at enrollment remained cancer-free over 25 years: Long term absence of invasive breast cancer diagnosis in 2,402,672 pre and postmenopausal women: a systematic review and meta-analysis.

Climacteric: In June 2013. Dr. Cutler and coauthors' Burki, Kolter, and Chambliss -- short review published in the journal of the International Menopause Society. Mammography for symptomless women - not so wise?

In Focus: In January 2013, Dr. Cutler and coauthors' Burki, Kolter, and Chambliss -- commentary published in online release to International Menopause Society members. Mammography screening in symptomless women may do them more harm than good.

Menopause Live - In November 2011, the online newsletter of the International Menopause Society printed and circulated the commentary, Mortality reduction by widespread screening: not quite as effective as we all hope?... on breast cancer, mammography and overdiagnosis by Dr. Cutler and coauthors Drs. Burki and Kolter.

Breast Cancer in Postmenopausal Women: What is the Real Risk? Dr. Cutler's oral presentation and abstract was accepted for the 65th annual meeting of the American Society of Reproductive Medicine (ASRM) October 2009

Hormones and Your Health: The Smart Woman's Guide to Hormonal and Alternative Therapies for Menopause Dr. Cutler's most recent book for women and their physicians published April 2009, John Wiley & Sons, Inc. Reviewed and recommended by medical professionals. Over 890 citations and references.

Wellness in Women after 40 Years of Age: The Role of Sex Hormones and Pheromones. Monograph published in Mosby's Disease-a-Month, September 1998.

Oophorectomy at Hysterectomy: A practice that does not withstand scrutiny. Published by Menopause Management, the NAMS education publicaton. December 1996.

Sex during menstruation may be harmful (synopsis for a lay audience)
The full scientific article ("Coitus and Menstruation in Perimenopausal women" Published in the Journal of Psychosomatic Obstetrics and Gynecology. December 1987)

Lunar Influences on the Reproductive Cycle in Women. Published in the journal, Human Biology, December 1987. **This paper subsequently replicated the 1980 study and paper published in the American Journal of Obstetrics and Gynecology -- see next link
Lunar and Menstrual Phase Locking. Dr. Winnifred Cutler and colleagues' published study on Menstrual cycles and the Lunar Cycle 1980.

Preservation of the Ovary:A Reevaluation. Dr. Celso-Ramon Garcia and Dr. Winnifred Cutler published paper in Ferility and Sterility, 1984. Routine ovariectomy at hysterectomy should not be common practice.

Regular weekly sex promotes a regular menstrual cycle. (1979 replicated 1985, 1991). Women who had regular (at least once a week) sex with a man had menstrual cycles that were within 3 days of the optimal 29.5 day cycle. Women who had "feast and famine" behavior with no regularity had the most irregular and abnormal length cycles, as well as deficiently low estrogen, while celibate women fell in between these 2 groups.

Hysterectomized women have greater bone loss than women who have not had this surgical removal of the uterus. (1988 In the early years following the surgery, these women lose bone mass about twice as rapidly as their non-hysterectomized counterparts.

Bone loss such as spinal osteoporosis can be efficiently & inexpensively screened by single photon densitometer of the WRIST. (1988). This is preferable to the more invasive and less safe x-ray of the spine.

Use of a simple, inexpensive Fleximeter (a trademarked rubber-coated flexible rod) can accurately trace history of spinal curvature to diagnose kyphosis (curvature) of the spine. (1993). This is preferable to less-safe x-rays or more expensive (D.P.A. dual photon absorptiometry) techniques.

Dr. Cutler in the Scientific Community

International Menopause Society Meeting 2018: "Screening for Breast Cancer--Is it Worth it? Current Controversies" Dr. Cutler's invited lecture. Dr. Cutler presented data of widespread overdiagnosis and the harms of over treatment that justify asymptomatic menopausal women and their advisors consider rejecting screening mammograms because they generate substantial harm without any demonstrated benefit.

In September 2015 on the Ursinus College campus, Dr. Cutler addressed an invited group of undergraduate psychology students and faculty reviewing 10 of the 23 scientific studies at Penn and Stanford that led to her landmark 1986 co discovery of human sex attractant pheromones.

In May 2015 Dr. Cutler presented a scientific poster at the Annual Clinical Meeting of The American College of Obstetricians and Gynecologists, in San Francisco: "Breast Cancer Incidence In 2,305,427 Screened Asymptomatic Women: Long Term Outcomes During Menopause." (pdf file)

In April 2011, Dr. Cutler presented a powerpoint presentation, HRT: The Role of Progesterone, to MLH physicians and staff for CME credit, at the Women's Health Symposium - Main Line Health System. As part of the conference: Challenges and Controversies in the Care of the Middle-Aged Woman.

In August 2010, the International Menopause Society newsletter printed Dr. Cutler's invited review of a published paper showing breast cancer only seemed to decrease when the 2002 WHI study and subsequent media caused women to stop using HRT. (With Dr. Regula Burki) 'A public health paper on breast cancer incidence that does not withstand scrutiny'.

2010 A Farewell to Dr. Elizabeth Genovese; a message from Dr. Cutler to her coauthor and friend.

In October 2009, Dr. Cutler presented her powerpoint presentation and talk at the 65th annual meeting of the American Society of Reproductive Medicine (ASRM), titled Breast Cancer in Postmenopausal Women: What is the Real Risk? (abstract) And click here for her slide show summary.

Dr. Cutler presents poster to the American Society for Reproductive Medicine at their annual meeting in Montreal, Quebec Canada. October 16-19, 2005. "Evidence that Sex Attractant Pheromone Effects Strengthen with Continued Use."

Dr. Cutler presents to the American Psychiatric Association at their Annual Meeting in New York, May 1-6 2004. With Dr. Barbara Bartlik, her symposium titled: How Sexual Attractiveness, Pheromones, Fertility, and Hysterectomy are Related.

Pheromones and Sexuality: Winnifred Cutler publishes essay describing her scientific path to discoveries about sexual attraction, how sexual behavior affects a woman's overall health, and that women over 40 do not have to feel "invisible" to men.

Pheromones and the Female Patient: Dr. Winnifred Cutler's invited article on pheromones and clinical applications for the female patient.

A Farewell to Dr. Celso-Ramon Garcia: Dr.Winnifred Cutler's message to her mentor and coauthor of many publications on women's reproductive health, who passed away February 1, 2004. Dr. Cutler donated a contribution in his honor to the University of Pennsylvania Faculty Scholarship of Trustees.

Dr. Winnifred Cutler publishes essay on menstrual suppression: Dr. Cutler analyzes the negative effects of menstrual suppression to a woman's body in her essay "Menstrual Suppression by Contraception and Non cyclic regimens of Hormonal Replacement Therapy are Potentially Dangerous to a Woman's Health".

The Impact of Hysterectomy on Sexual Life of Women A Poster presentation presented by Dr. Winnifred Cutler and colleagues at the American College of Obstetricians and Gynecologists 2001 meeting.

Sexual Response in Women. A Poster presented by Dr. Winnifred Cutler and colleagues at the American College of Obstetricians and Gynecologists 2000 meeting-differences in sexual response between hysterectomized, intact women, and women with fibroids. Also looks at effects of childbirth on sexual response.
More info about this meeting

Pheromones as Sex Attractants: Their Role in Human Reproduction. A Seminar presented by Dr. Winnifred Cutler at the American College of Obstetricians and Gynecologists 1999 meeting.

Other Athena Research and Information on Women's Health

Excerpts on 'hot topics' for women from Dr. Cutler's books and research presentations:

March 2018, With support from a Student Research and Creativity travel grant and Dr. Winnifred Cutler, President of Athena Institute, Ursinus Student Temi Olafunmiloye was able to present her work at at the 75th annual scientific meeting of the American Psychosomatic Society, the members of which examine processes at the intersection of psychology and medicine.

In August 2015, Athena Institute President Dr. Winnifred Cutler and her husband, Thomas E. Quay, Esquire, the Institute's General Counsel, made a substantial financial gift to Ursinus College to sponsor its Entrepreneurial Psychology Research Fund. The grant will support faculty and student research projects exploring the habits and experiences of young generations and will create the "Psychology Faculty and Student Support Fund" under the direction of Dr. Cathy Chambliss, Department Chair.

Athena Institute is pleased to offer a guide to medical school applications available on pdf file for download. This manual Searching For Admission: The Smart PreMed Student's Guide to Applying for Medical School is a 'take-home' personal advisor to the admissions process.

Athena Institute awards second installment of its Research Grant to Kinsey Institute for the Study of Hysterectomy and Sexual Deficits; 2006

Athena offers an opportunity for local high school students to conduct research by interviewing the college students who are current premed hospice volunteers to learn whether the ongoing program is delivering what it promises to those college students, and submitting to Rev. Dr. Robinson their findings and analysis. In 2017, these 5 seniors who were immersed in their own college applications, performed this volunteer service, 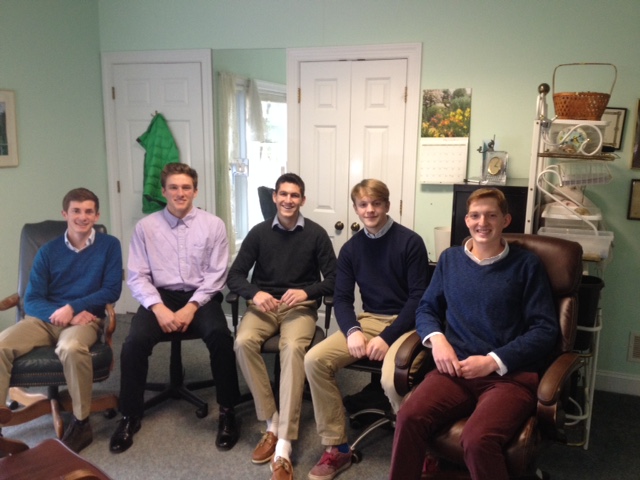 Athena Institute awards research grant to Cindy Meston, Ph.D. in 2003. Dr. Meston's study, The Effects of Hysterectomy on the Subjective and Physiological Sexual Function of Women with Benign Uterine Fibroids, was published in Archives of Sexual Behavior (Feb. 2004).

These research advisors evaluate research grants and protocols for clinical investigations from ethical, scientific, and medical criteria. They serve without compensation.

Catherine A. Chambliss, Ph.D. - Professor of Psychology, has taught at Ursinus College since 1979 and chaired the Psychology Department for 24 years. She graduated Phi Beta Kappa from Yale in 1975, and completed her M.S. and Ph.D. in clinical psychology at the University of Miami. As a licensed psychologist in private practice since 1981, in collaboration with students and colleagues she has published >300 research findings examining both inpatient and outpatient behavioral healthcare, the familial impact of maternal employment, student smoking cessation, relationship disruption and depression, including mobile device apps for managing stress.

Athena Institute and Dr. Cutler would like to especially thank former founding research advisors who have since passed away: the late William F. Drake, Jr. Esq., Dr. Norma McCoy, and Dr. Elizabeth Genovese for their commitment to the shared mission of working to improve the quality of women's healthcare.