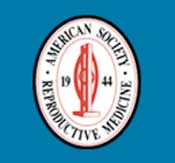 Evidence that Sex Attractant Pheromone Effects Strengthen with Continued Use

ASRM is a national and international medical society and the recognized leader for multidisciplinary information in the field of reproductive medicine. ASRM members reside in all 50 of the United States and in over 100 other countries. Members include obstetrician/gynecologists, urologists, reproductive endocrinologists, embryologists, mental health professionals, internists, nurses, practice administrators, laboratory technicians, pediatricians, research scientists, and veterinarians

In nature, pheromones are powerful agents driving reproduction and perpetuation of the species.

* The female formula was independently tested at San Francisco study on 36 women 19 to 48 years old.3

*The female formula was independently tested in 44 postmenopausal women 47 to 75 in Boston.4

A similar protocol was followed for each trial to provide prospectively recorded sociosexual behavioral monitoring of daily fragrance use during 2 baseline weeks and 6 experimental weeks.

To avoid the potential for menses abstinence to obscure effects, the San Francisco researchers expanded the experimental period to 9 weeks; testing 3 postmenses weeks from the last 2 cycles.3

Each study found that a greater proportion of pheromone than placebo users increased over their own individual baseline weekly frequency in sociosexual behaviors.

The biggest effects were:

* Sexual intercourse in the Philadelphia study of fertile-aged men (p < .01)

* Petting/kissing/affection in the Boston study of postmenopausal women (p < .02)

In the San Francisco study, pheromonal effects strengthened with continued use: “Significant effects appeared to occur within the first cycle and the proportion of women recording effects increased by the second cycle.”3

Here we examine post hoc whether the same strengthening phenomenon occurred in the Philadelphia and Boston studies.

We hypothesize that pheromonal effects do strengthen with continued daily use.

Design: Using tabulated records of the daily calendars, data were transposed to the number of days per week a behavior had been prospectively recorded. We used Chi Square, one-tailed.

* For men we tested sexual intercourse.

* For postmenopausal women we tested petting, kissing and affection

Table 1: The Effect Of Daily Application Of Pheromone-Spiked Aftershave Strengthens Over 6 Weeks In Men 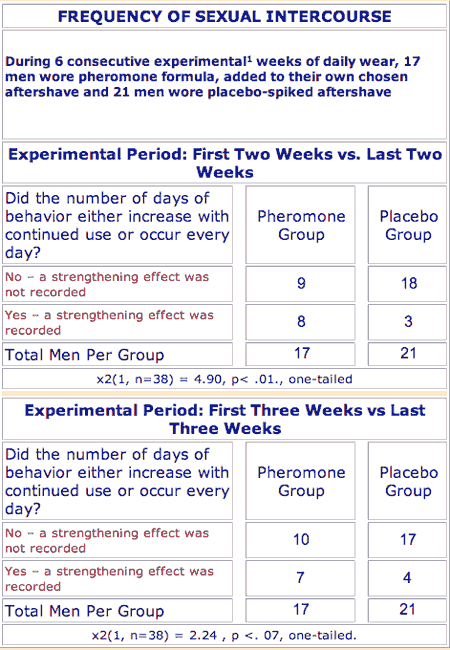 A greater proportion of pheromone than placebo users recorded an increase in their weekly frequency when the first 2 weeks were compared to the last 2 experimental weeks.

A similar trend occurred when the first 3 vs. last 3 experimental weeks were compared .

1The 6 experimental weeks analyzed here followed a 2 week baseline period in which all 38 participants wore their chosen fragrance every day recording their behaviors.

Table 2: The Effect Of Daily Application Of Pheromone-Spiked Fragrance Strengthens Over 6 Weeks In Postmenopausal Women 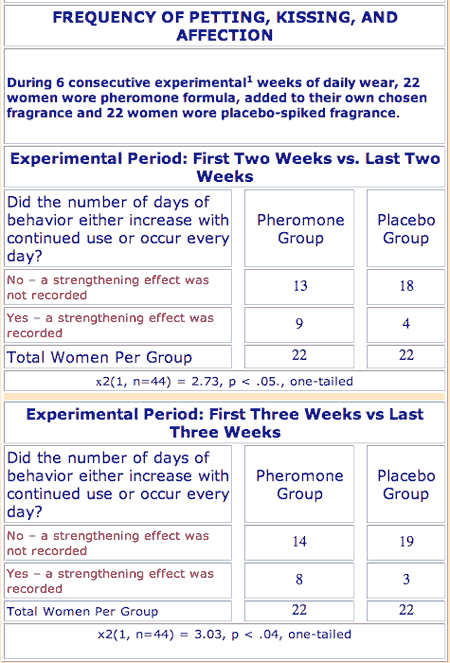 For postmenopausal petting, kissing, and affection,

A greater proportion of pheromone than placebo users recorded either an increase in their weekly frequency or maintained daily behavior , [7 d/week], when the first 2 vs. the last 2 experimental weeks were compared.

Comparing the first 3 weeks to the last 3 weeks showed similar results of pheromone (but not placebo) users increasing their behavior in the second half of the experimental period.

1The 6 experimental weeks analyzed here followed a 2 week baseline period in which all 44 participants wore their chosen fragrance every day recording their behaviors.

As usage continued, those who engaged in daily behavior maintained it; those with lower levels tended to increase.