A Seminar presented by Dr. Winnifred Cutler at the American College of Obstetricians and Gynecologists 1999 meeting.

Forty-seven clinical seminars were presented by moderators on subjects of special interest.

As the only non-ACOG member accepted to present a seminar, Winnifred Cutler, Ph.D., President and Founder of Athena Institute, addressed an audience of thirty-one on her area of expertise, reproductive biology in relation to human pheromone research.

Scheduled during the Monday afternoon time slot between 2-3:30, Dr. Cutler's seminar (MCS 32 on the program) was titled,
"Pheromones as Sex Attractants: Their role in Human Reproduction
and included an interactive question and answer period.

The 47th Annual Clinical meeting of The American College of Obstetricians and Gynecologists was held at the Pennsylvania Convention Center in Philadelphia. On Monday, May 17, 1999 the 49th President of ACOG, James P. Youngblood, M.D. welcomed attendees into the main ballroom and handed the floor over to the honorable Christine Todd Whitman, Governor of New Jersey, who presented the 1999 Cosgrove Memorial Lecture on women's health. Mary E.D'Alton, MD acted as the General Chair of the Annual Clinical Meeting this year.

Dr. Cutler opened her 90 minute discussion with a historical overview of pheromone research as it evolved from animals to humans. By first defining "pheromones" as "excreted chemical substances which trigger reproductive behavior within the same species", she led her audience through the four known classified pheromonal actions

Citing research conducted throughout the 1960's and 1970's by scientists such as Dr. Richard Michael, Dr. Cutler explained the findings of sexual behavior influenced in monkeys and pigs by topical pheromonal application. She also explained that the tests conducted later in the 1980's on humans, using these animal species' pheromones, resulted in negative, aversive-type responses. The studies discussed suggested that though also detected in human urine, the substance androstenol found in pigs, seemed to act as territorial markers or repellants, rather than sex attractants, in humans.

Her scientific overview progressed to the current day findings, as Dr. Cutler explained the research of the past few years surrounding the search for putative olfactory receptor sites. While confirming that more research is being conducted and presented on the subject, she compared the two established sites. The Olfactory Epithelium as a receptor site seems to involve higher order sensory processing while research suggests that, though the role of the Vomeronasal organ (VNO) is established as pheromonal receptor in animals, as part of the human olfactory system, if it is functional at all it responds to more primitive simple functions such as territorial repellants.

The stage was set to move quickly into Dr. Cutler's own landmark studies of human pheromones. Dr. Cutler reviewed for the academic audience how the timing of sexual behavior of women, including age at onset and regularity of exposure, influences the reproductive endocrine system.

The Effects of Sexual Frequency and Pheromonal Exposure on Fertility Cycles

Displaying human research data, Dr. Cutler explained how studies showed that patients with increasing severity of infertility revealed a correspondingly delayed age at first coitus, suggesting a critical window of seven years after menarche for optimal onset of sexual life. In one of the most remarkable series of studies, coital frequency was shown to influence menstrual cycle lengths

Each dot represents one woman's average cycle length. Look first at the twenty dots in the weekly category, the bottom grouping. You will see that every one of these women had an average cycle length that was in the fertile range (the vertical lines bordering twenty-six and thirty-three days). If you look above this at the sporadic group, you will see that more than half of the twenty sporadic women had cycle lengths that were outside this range, either shorter or longer. Then, looking above the sporadics to the nevers, you will find that fewer aberrantly short and aberrantly long cycles occurred in this group

Dr. Cutler illustrated how studies she had conducted while at the University of Pennsylvania collected data from sixty women recording three categories of sexual frequency: Regular or Weekly, Sporadic, and Never/Celibate. Data demonstrated, as charted on Table 1, that regular Weekly behavior predicts normalized menstrual cycle lengths of 29.5 + 3 days, while Sporadic and Celibate behavior predicts aberrant cycle lengths in 50 %, lower estrogen levels, and subfertile BBT patterns. These studies were replicated at Stanford, and several years later at the University of Pennsylvania and subsequently at Arizona State University and New Mexico State University.

Furthermore, Dr. Cutler informed her audience, as the BBT records of an additional pilot study of 83 women demonstrated, aberrant length menstrual cycles were more likely to be anovulatory or more often reveal luteal phase deficiencies and be subfertile.

To help understand what led Dr. Cutler from the sexual frequency data to the search for human pheromones, she chronicled the experimental reports from McClintock, Russell, and her own 1986 research with colleagues, on the menstrual synchrony effect of pheromonal "essence" batched from both male and female underarm sweat and applied topically to women. Dr. Cutler explained that it was from their 1986 study data that she discovered a significant pattern in the increase of regular, consistent sexual behavior among the women in the study who received applications of donor extract, or pheromones

Dr. Cutler then highlighted for her ACOG audience a calendar of collected data from the sexual frequency study demonstrating that the significant results from sexual behavior were NOT influenced by self-stimulation, or even, orgasm. The physical intimacy or stimulation in the presence of a male partner seemed to be the key variable in producing optimal fertile cycle lengths in the women test subjects. The man added something that she could not supply for herself. And the search for that something encouraged Dr. Cutler to pursue the sex attractant function of human pheromones.

Pheromones as Sex Attractants-Research to Date

Next, Dr. Cutler presented her outline of the experimental reports on human pheromones as sex-attractants. The first study mentioned was the analyzed data by Cutler and Stine (1987) from the double-blind study conducted on 20 women using extracted pheromones. Dr. Cutler reiterated that the data demonstrated an increase for pheromone recipients, but not placebo, in the incidence of consistent weekly sexual contact with a man. Women who received female pheromones, applied topically 3 times a week, tended to have more sexual contact with men than women who applied placebo topically.

Printed in their ACOG seminar course outline, the attendees could refer to Table I and Table II as Dr. Cutler explained the double-blind, placebo controlled study she conducted with colleagues from San Francisco and Brooklyn, which was published in the peer-reviewed medical journal, ARCHIVES OF SEXUAL BEHAVIOR (Feb.1998). The data from this study showed that men who received male pheromones topically tended to have more sexual contact with women than the men who applied placebo. 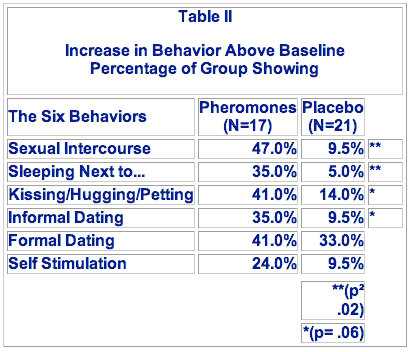 The trial of 38 men, Dr. Cutler explained, demonstrated that while both pheromone and placebo users had reason to have the same expectations, this topical pheromone increased those sociosexual behaviors requiring the willingness and cooperation of the female partner, but not those in which the partner played a lesser role. Thus this pheromone significantly increased the sexual attractiveness of men to women.

(For more information on the ARCHIVES OF SEXUAL BEHAVIOR study see 10X study).

Inevitably, the discussion of such intriguing research led to the question of "What next for pheromones?" Dr. Cutler confirmed that she continues to review state-of-the-art findings on human pheromones and her chapter on human pheromones is in press for an upcoming medical textbook. Her final points invited her audience to consider the possible therapeutics benefits and potential uses for topical pheromone application in sexual counseling and, in turn, in promoting the emotional, sexual, and reproductive well-being of women. (For more information see Psychiatric Annals).

Dr. Cutler welcomed questions from the audience members who had them. In anticipation of further inquiry, Dr. Cutler provided her audience the cited references for continued study by handing out a copy of her full monograph published by Mosby, Inc. in the journal, DISEASE-A-MONTH, titled "WELLNESS IN WOMEN AFTER 40 YEARS OF AGE: THE ROLE OF SEX HORMONES AND PHEROMONES".