Infertility and Age at First Coitus: A Possible Relationship

Winnifred B. Cutler, Celso-Ramon Garcia and Abba M. Kreiger Department of Obstetrics and Gynecology, Hospital of the University of Pennsylvania, Philadelphia, PA

With the single exception of the human, initiation of reproductive behavior is concomitant with the maturation for mammalian reproductive physiology.

For a variety of sociological, religious and economic reasons, the onset of copulatory behavior in industrialized societies is frequently delayed well beyond the onset of the menarche.

What effect does such reproductive behavior, which is observed only in the human species, have upon reproductive performance?

With this question in mind, the reported first coital age of a population of 792 women was examined for a possible relationship to the incidence of fertility.

The data are drawn from a sample of most of the active files of patients seen within the past 2 years in the medical gynecological-infertility practice of one of the authors (CRG).

The data were alphabetically obtained *** Confidentiality was assured by not identifying the patient or family. At the initial visit of each patient and her husband or partner, medial history questionnaires had been completed, concerning individual disease, allergies … and particularly gynecological information concerning menstrual, marital, and intercourse frequencies, including age at first coitus.

In this heterogeneous practice approximately 80% are white women. Since Pearl (1936) and McFalls (1973) both showed that black and white women practicing no contraception present no significant differences in fertility rate, the combined review of these groups should not affect the results of the fertility analysis.

This preliminary study offers a general picture of this highly specialized medical practice… The bulk of the patient population is referred by the primary physician only after the more usual routine measures have failed to solve the infertility problem.

The patients therefore represent a special group with respect to the pathologies which are referred to the center (Hospital of University of Pennsylvania).

It is of interest, moreover, that the parous women reported coital ages which preceded the ages at which they achieved conception by a significant interval (5 years). It is reasonable to assume that the infertile women presented comparably valid information. 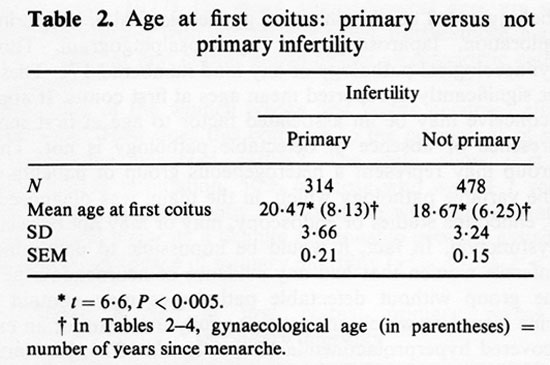 …Primary infertility is defined as the inability to conceive despite unprotected coitus for at least two years prior to the initial consultation. It is the routine practice of the fertility service to assess the husband’s seminal characteristics in evaluation the cause for the infertility, but as described, spermatic and ovarian pathology is very rare n this patient populations. 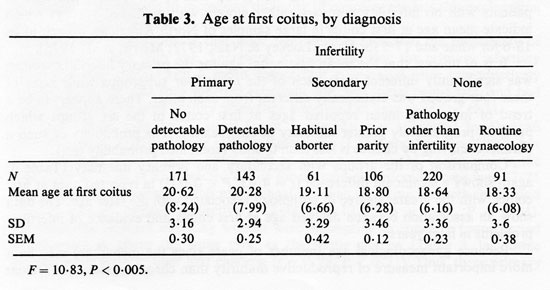 The total population is next grouped into the six diagnostic categories in Table 3 and these also differ highly significantly in reported age at first coitus (F= 10.83, p <0.005). The primary infertility women are separated into two groups. The first consists of those 143 women who presented detectable pathology, …. Those with no detectable pathology of any kind numbered 171.

These two groups did not differ significantly in reported mean ages at first coitus. It appears that the inability to conceive may be an associated factor to age at first reported coitus, while the presence or absence of detectable pathology is not.

This detectable pathology group may represent a heterogeneous group of patients with primary infertility.

Whether or not the lack of difference between these two subgroups is to be attributed to the imprecision of their distinct, the fact remains that primary infertility, i.e. the inability to conceive despite 2 years of unprotected coitus, is associated with a relatively later first coital age than that of other women in this patient population.

Secondary infertility is defined as current difficulty to conceive despite a prior conception. There are two subgroups: the prior parity subgroup have given birth before and are now unable to conceive; the habitual aborter subgroup, while achieving pregnancy, have never carried it to term. No significant difference in reported age at first coitus existed between these two subgroups. 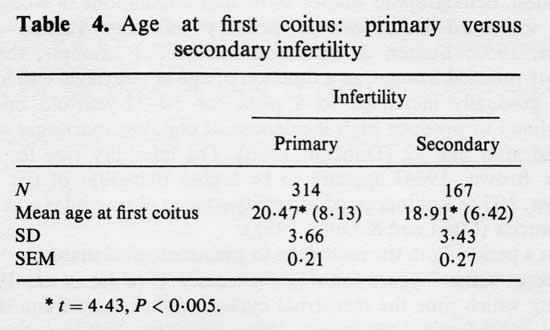 The data show that among this predominantly infertile population, 50% of those who waited 7 years presented primary infertility as compared with 30% of those who did not wait…

Several explanations of these data seem plausible. The first is that the physiological pathology, which will later be evidenced in infertility problems, is present early and somehow affects behavior and time of first coitus. The gradually increasing ages relating to increasing difficulty to conceive renders this explanation somewhat unsatisfactory.

A second explanation is that after reproductive maturity, the probability of infertility increases with age. Therefore, it is possible that the primary infertility groups in this study (with a mean higher first coital age) were reproductively normal once, but that they married relatively later, had initial coitus late, and had some degree of impaired fertility when they attempted to have their first child.

A third explanation is that sexual behavior may alter the physiology…. In humans and other mammals, increasing frequency of copulation has been repeatedly shown to further the reproductive capacity of the individual…

It seems reasonable that the age at first coitus reflects the onset of continued coital activity.

But, regardless of the exact nature of cause and effect, the fact remains that in this infertile population delayed age at first coitus is associated with the inability to conceive a child. It would be useful for future studies to discover which specific pathological and social indices are associative, and which are irrelevant. Additional investigation

For more research on this topic and reproductive health/aging by Dr. Cutler. Please visit...

Wellness in Women after 40 Years of Age

WebMD.Com Interview on The Science of Intimacy

Love Cycles: The Science of Intimacy