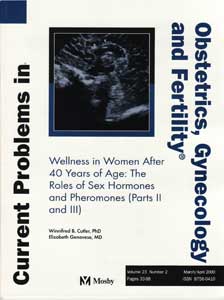 Reissue: Wellness in Women After 40 Years of Age: The Role of Sex Hormones and Pheromones

By Winnifred B. Cutler, Ph.D. and Elizabeth Genovese, M.D.

"With a baseline of below-average sexual activity, the post-hysterectomy 'improvement' is a chimera."

In 1998, the original Monograph Wellness in Women After 40 Years of Age: The Role of Sex Hormones and Pheromones was published in the Journal Disease a Month.

The updated research in the March/April 2000 issue including Part II and III of Cutler and Genovese's monograph challenges the study recently published in the Journal of the American Medical Association (JAMA) which found an "improvement in sex lives" for women after hysterectomy.

The Maryland Woman's Study (Rhodes et al. Vol. 282. #20) published in JAMA asked women to rate their sex lives at 12 and again 24 months post-surgery compared to their sexual activity 30 days prior to surgery. In their monograph update, the authors argue that using the immediate pre-surgical "sexual wasteland" as a baseline to demonstrate a post surgical "improvement" substantially erodes the validity of the Rhodes conclusions.

Cutler and Genovese fear this erroneous finding of an "improvement in sex lives" will sway women towards unnecessary hysterectomies. They caution those who read reports that claim women's sexual lives will be improved by hysterectomy to look closely at the baseline. Compared with "what" will her sex life be improved?

"With a baseline of below-average sexual activity, the post-hysterectomy 'improvement' is a chimera."

From the FOREWORD to the monograph
by Editor in Chief, Sarah L. Berga, M.D.:

"To some extent, wellness is an unfamiliar concept for physicians. Most of our medical training has focused on identification and relief of pathologic conditions.*** More and more, however, physicians are called upon to address health maintenance and to recommend strategies for wellness. *** The two monographs...embrace the theme of wellness and aging and are offered to you, the reader, in consideration of this emerging paradigm shift. There is no better time than the turn of the millennium to reflect on what we, as physicians, are, could be, will be, and should be.

These two monographs raise some difficult questions that are not readily addressed. How healthy can women realistically expect to be as they live longer and longer? Will hormonal preparations serve merely to buttress failing systems or will they slow the rate of aging? What is the role of sexuality in older adults and can it be enhanced by hormones, pheromones, and other agents? How will we, as physicians, figure out who needs what and when? Who will reimburse us for undertaking this role as the guardians and facilitators of wellness?

The foundation for many of these questions rests with having or developing a comprehensive understanding of reproductive physiology. These companion monographs are offered in that context. Some of the material is controversial, but this does not detract from the overall objective. The authors have employed an integrative mind-set to examine the contributions of various endogenously produced hormones and pheromones to wellness in women."

In the past twenty years, hundreds of peer-reviewed studies have provided a significant body of information to guide the health care of women in the second halves of their lives. The harmonic nature of the fertile reproductive system forms the background against which hormonal replacement therapy can be understood to best serve women. In addition, the 1986 discovery of human pheromones and the subsequent 1998 confirmation of their existence increases certain sexual options for maturing women.

Not all hormonal replacement therapies and wellness regimens serve women well. Some regimens have the potential to produce disease, especially over-the-coutner remedies...Some regimens profoundly improve the quality of life of many women: some women do not need or want such regimens. All sex hormones affect physiologic systems including the cardiovascular system, bone metabolism, cognitive function, sexual response, and sexual attractiveness.

*** The complex contributions to the overall health of a woman may not always be understood. Often a hysterectomy can exacerbate - rather than ameliorate - the conditions that led to the surgery. One in 2 American women is offered a hysterectomy, a rate 5 times higher than that of European countries for which data are available. Ninety percent of hysterectomies are not related to cancer; they are elective procedures. Avoidance of elective hysterectomy helps prevent its side effects: sexual deficits, acceleration of cardiovascular and bone disease, and more rapid aging. No efficacy data exist that suggest that elective hysterectomy works better than the alternative approaches that do not induce these side effects.

*** Because hormonal regimens can be prescribed to enhance the quality of life, the review of the available research can allow the medical art to greatly benefit mature women. Not surprisingly, the emerging conclusion reveals that structurally human hormones, prescribed appropriately, almost always best serve the patient.

Also, currently in circulation, PART I of the monograph addresses current research on: Sex Hormones, Perimenopause, Pheromonal Modulation of Brain and Behavior, Sexual Behavior of Women, and Prospectively Measured Changes in Global Sexual Behavior After Application of Putative Pheromones.

In the past twenty years, hundreds of peer-reviewed studies have provided a significant body of information to guide the health care of women in the second halves of their lives. Physicians who care for women patients should understand the interplay between sex hormones and the patient's well being. Estrogen, progesterone, testosterone...play significant roles in maintaining the cascade of physiologic events that promote healthy bone metabolism, sexual interest and response, cardiovascular function, adequate sleep and energy cycles, competent memory, and a strong immune system in women.