Why you should be taking Vitamin C 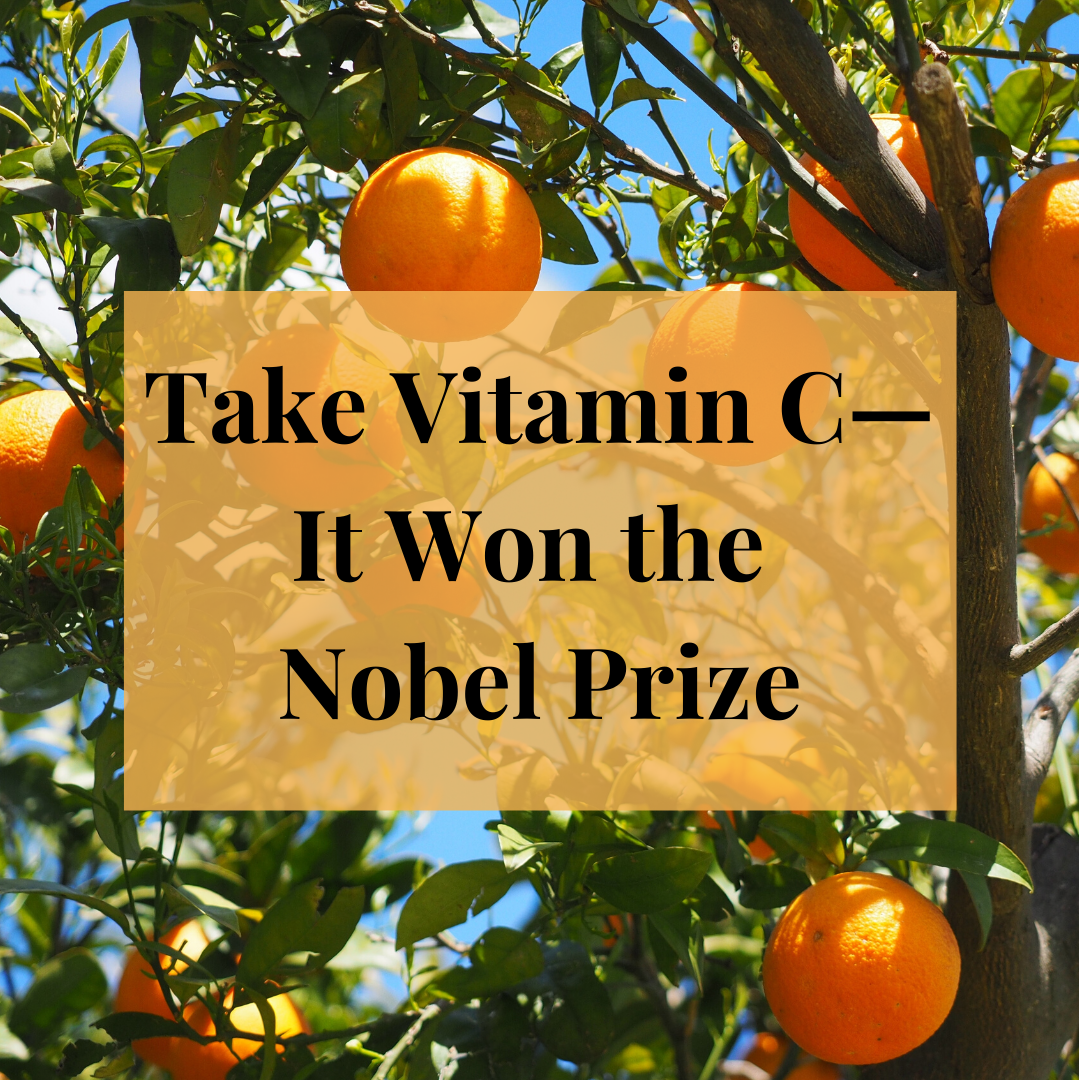 Excerpted from the Nutrition Chapter of Dr. Winnifred Cutler’s book: Hysterectomy: Before and After - A Comprehensive Guide to Preventing, Preparing for and Maximizing Health After

Although the optimal dosage levels have not yet been defined, a variety of studies suggest that megadoses of vitamin C, also known as ascorbic acid, have beneficial effects on wound healing; cardiovascular health and reduction of atherosclerotic risk; strengthening of the bones; overcoming toxic effects from benzene, phenol, alcohol, ozone, and textile dust; the prevention of certain cancers; prevention of cataracts; central-nervous-system functioning; and promotion of iron absorption.

The role of vitamin C in the healing of wounds is discussed in Chapter 5. Whenever you are healing, you need more C in order to promote the collagen synthesis that is necessary for replacement of tissue.

Vitamin C appears able both to reduce the cholesterol level and to increase the beneficial protective lipid. One recent study evaluated the vitamin C and E levels in blood in populations that showed likelihoods for cardiovascular death. In those groups that had a high risk of cardiovascular disease, the blood levels of vitamins C and E were very low; in those groups that had very low risk of cardiovascular disease, the blood levels of these vitamins tended to be high. As early as 1970, publishing in the American Journal of Clinical Nutrition, Dr. Carl Shaffer concluded: “Coronary atherosclerosis…appears to be, in part, a possible result of deficient ingestion of ascorbic acid.”

Vitamin C also helps women aged 35 to 65 strengthen bone, according to one four-year study that compared calcium tablets to placebo. For the women who were not taking calcium tablets, the higher the vitamin C content in their diet, the greater their bone mass. This relationship was revealed when data were examined each year as well as after the four years of the study. The author concluded: “The biological basis for this apparent contribution of vitamin C in increasing bone density could be the role of vitamin C in collagen hydroxylation (related to bone tissue buildup) and osteoblast growth or in C-induced changes of calcium absorption.”

Protects the Lungs and Counteracts Toxins

In several different kinds of experiments, vitamin C appeared to play a protective role against the reflex blockage of air flow in the lungs (which occurs when poisons are inhaled). For example, it protected hamster lung tissue against the carcinogenic effects of tobacco smoke. Thus, although controversy remains about the relevant dose, some investigators have suggested that those people who are unable to stop smoking should, at the very least, be taking an extra 2,000 milligrams of vitamin C per day.

Ozone, a pollutant produced in cities by cars, certain factories, certain cigarette smoke, and other poisons, causes the lung passages to constrict, and vitamin C has been shown to protect against this broncho-constriction. In one experiment, vitamin C (1,000 milligrams per day) combined with vitamin E (800 IU per day) protected best against ozone-induced broncho-constriction. Another study looked at people with asthma (a disease in which the lungs constrict) to see whether 2,000 milligrams of vitamin C (in four 500 mg doses) would improve the airway problems. The results were positive.

Other pollutants have been studied. Chronic exposure to benzene has been implicated in leukemia; ascorbic acid is protective. The body’s response to benzene and its metabolized products, phenol, as well as the body’s ability to handle alcohol toxicity, all appear to be enhanced when vitamin C is taken. In one set of experiments in which guinea pigs were given high amounts of alcohol, vitamin C was shown to protect against liver damage. In studies of men with high blood alcohol levels, vitamin C improved motor coordination, the ability to discriminate color, and the clearance of the alcohol from the blood.

Ascorbic acid deficiency has been shown to have relationships to the development and proliferation of cancers. Relationships between ascorbic acid and serum proteins with the immune system have also been demonstrated. For example, when compared to age-matched controls, women with cervical cancer were shown to have much lower levels of vitamin C both in their diet and circulating in their blood. The authors of one study concluded that a vitamin C intake below 30 milligrams a day coincided with an incidence of cervical cancer that was ten times greater than in women who ingest more than this. Women who have cancer (breast, leukemia, and other forms) generally show less than half the amount of circulating vitamin C than matched controls who are healthy. Vitamin C appears to benefit the immune system by helping to promote the secretion of some of the antibodies that protect it.

Ascorbic acid is necessary for the production of enzymes that in turn are necessary for nerves to fire properly. Discoveries reported in 1987 led investigators at the New York Academy of Sciences to conclude that there should soon be no doubt that inadequate levels of vitamin C within the nerves would account for many endocrine disorders. The adrenal gland produces cortisone, adrenalin (also known as epinephrine), and other substances. Adrenalin is a neurotransmitter-a substance that triggers the firing of certain nerves and that in turn promotes the activation of critical elements within the nervous system. Recent studies have shown that vitamin C is necessary in order for adrenalin to be produced with the cells of the adrenal glands. Other helpful adrenal gland responses to megadose levels of vitamin C has also recently been reported.

Ascorbic acid promotes iron absorption. The higher one’s intake of fiber or tannin (contained in red wine), the more one needs the vitamin in order to permit the absorption of iron. Why? Apparently, fiber and tanning molecules, which themselves do not get absorbed, bind to iron molecules and can prevent their absorption to the body. The 1987 publication from the New York Academy of Sciences conference on vitamin C concluded that each main meal should contain 25 to 50 milligrams of vitamin C, and that if the mean was high in fiber or tanning, then at least 250 milligrams of vitamin C were needed. So, if you drink a lot of red wine with your dinner, it is conservative to consume vitamin C at the same time.

How much vitamin C should you take? Probably somewhere between 500 and 8,000 milligrams per day, depending upon your level of stress, your exposure to colds, whether you currently have a cold or virus, whether you are a smoker, and your general immune strength. Can you achieve this level through natural dietary means? Probably not. It takes four quarts of freshly squeezed orange juice to provide 500 milligrams of vitamin C. Will this level of vitamin C potentially be harmful? Not likely. Will it help? Very likely. Although we must make decisions based on limited knowledge, the weight of evidence for and against large doses of vitamin C emerges on the side of “for”.

Dr. Linus Pauling, a two-time Nobel prize winner, is a well-known and powerful advocate of megadoses of vitamin C. Because his attitude has been so strongly in favor of taking large doses, it was perhaps inevitable that an equally strong view would emerge among those who did not share his great enthusiasm.

Body levels of ascorbic acid have been studied. Given equivalent dietary intake, elderly men show significantly lower blood levels than elderly women. Since women live longer than men, perhaps vitamin C plays a role in longevity. But blood levels of vitamin C are only part of the picture. Different tissues of the body store vitamin C in much higher concentrations that what is found in blood. Thus, blood levels may not provide relevant information about the overall level of vitamin C in the body.

Our current knowledge does help us know how to maximize the blood levels of vitamin C. The results of several studies seem suggest that 500 milligrams is the most that can be added to the blood level at one time, that maximal absorption is reflected in blood about two hours after the vitamin is taken orally, and that people who spread out their daily vitamin dose maintain high blood level concentrations of vitamin C. Until we know more about how much vitamin has reached the tissues, it is probably best to break up doses of vitamin C supplements into a maximum of 500 milligrams each, no more often than every two hours. People vary in the amounts of vitamin C their bowels will tolerate. Mild diarrhea will signal you to cut back your dosage level.

Are there any dangers from taking high doses (more than 1,000 milligrams at a time) of vitamin C? So far, although there have been statements in medical journals that high vitamin C dosing can be dangerous, there is no substantial proof. In spite of earlier suggestions that vitamin B6, or B12 levels might be adversely affected by high doses of vitamin C, carefully conducted recent studies have shown that vitamins B6 and B12 are not adversely affected by vitamin C megadose supplements.

These topics and other nutrition topics can all be found in the Nutrition Chapter of Dr. Cutler’s book: available for purchase here