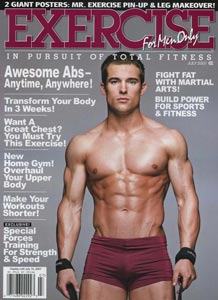 Copyright ©
Exercise for Men Only magazine.

For an article in the men's fitness magazine, Exercise for Men Only - Athena Pheromones are featured as the gold standard. Excerpted by Athena Institute

You know sexual attraction isn’t just about how you look (although it helps…hence your gym membership). Extensive research has confirmed that humans, like all animals, send out chemical signals to trigger responses from others. Those “messengers” are called pheromones. And some of us have more than others. So how to compete in the game of sexual attraction?

Dr. Winnifred Cutler can help you win. A biologist and author, Dr. Cutler discovered human sex-attractant pheromones in 1986, founded her research organization Athena Institute that same year, and developed two cosmetics with odorless synthesized human pheromones (a chemical copy of the strong virile pheromones men in their twenties send out) you can mix with your aftershave to increase your sexual attractiveness.

Sound like a stretch? Actually it is hard science. The pheromone fragrance additives Dr. Cutler developed, Athena Pheromone 10:13 for women in 1993, and Athena Pheromone 10X for men in 1995, have undergone double-blind, placebo-controlled studies proving they increase romantic attention. For us non-scientists, those studies are the gold standard– and virtually no cosmetics are tested that way. Her study was published in the journal, Archives of Sexual Behavior and showed that 74% of the men wearing 10X got more romance (behavior included kissing, dating, and sexual intercourse).

Athena Pheromone products are cosmetics, not drugs. And they are only available from Athena Institute so for more information visit www.athenainstitute.com or call 610-827-2200 for a 4-6 month supply for $99.50. Always go for the gold standard…in fitness and in romance.

See more articles on the "Lighter Side" in the Athena Media Section...