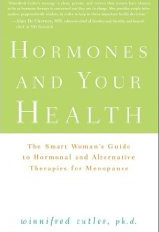 "Look Inside" Dr. Winnifred Cutler's essential book; an excerpt from Chapter 6 for readers.

The term stress urinary incontinence denotes involuntary leakage during physical effort or exertion, during sneezing or coughing, or when a doctor observes it in a medical exam. Urinary urge incontinence is another condition: the involuntary contraction of and emptying of the bladder. Epidemiological data in the United States show that incontinence peaks in old age; by middle age, 1 in 3 report leakage at least weekly, and approximately 1 in 4 women with UI consults a health-care professional for help. Prolapse increases the risk. 515

UI makes women anxious, embarrassed, and unwilling to undertake a wide range of activities. This can be logically expected to diminish their quality of life.253 Expert researchers recommend avoiding surgery, if at all possible, since many gaps in current medical knowledge hinder women from objectively selecting the best therapy. And surgery can have serious adverse consequences.568

More than 1,000 postmenopausal women who were generally healthy members of an HMO participated in a two-year follow-up study that provided some compelling information. More than 60 percent of the women in this group ages 55 to 75 acknowledged that they had UI. Prior hysterectomy increases the incidence of a new onset of severe problems. Yet having UI during one year does not mean that the woman will have it the next year.374 Each year 19 percent of continent women developed incontinence, and 14 percent of the incontinent become continent. So the data suggest that incontinence progressively increases into old age, even in well-functioning older adults, but that women can overcome incontinence.374, 537

Nonsurgical Treatments of UI
Weight loss and postural changes (such as crossing one's legs) help, but reducing fluid intake does not help. Smokers suffer more nocturia (getting up at night to urinate) and more UI than nonsmokers do.31, 568 Moderate physical activity clearly reduces the likelihood that a woman will develop UI, according to a 2007 analysis of the 2,352 women in the Nurses Health Study who developed new “leaking” problems in their mid-60s. Women who had the highest levels of moderate physical activity per week, such as walking, were most immune to a new onset of UI.184 So keep moving!

Pelvic floor muscle training is highly effective and should be done first. If you practice this, it is likely you won't need to do anything else. If you can stop a stream of urine without grimacing or contracting any muscles that show on the surface of your body, you are probably engaging the correct muscles.

All of the regimens show good results, but some are easier to do.105, 277, 535 Behavioral training programs require that you learn the basic anatomy of your body, then discover which muscles need strengthening and identify the relevant muscle group. These programs are very easy to do. Simply place a (clean) finger in the vagina to learn whether the correct muscles are contracting; you'll feel the pressure. Some teaching regimens are that simple. Others use a tool linked up to a computer screen. The tool contains a tamponlike instrument that you insert vaginally, then look at the feedback screen to see your compression strength as you squeeze around the tool. Women owe a debt of appreciation to Dr. Arnold Kegel, a physician who invented the technique for strengthening the pelvic floor.

Dr. Kegel published his pioneering “Physiologic Therapy for Urinary Stress Incontinence” more than fifty years ago (1951) in the Journal of the American Medical Association (JAMA). By 2002, it was well confirmed that properly taught Kegel exercises are effective in curing UI for most women.535 (These exercises have been widely used for more than twenty-five years; for a more complete description, the reader can find them in Hysterectomy: Before and After by W. B. Cutler.168) Women who do the exercises at least three times a week can expect a high probability of curing themselves by rebuilding their muscle strength. As you strengthen your pelvic floor muscles, your prolapse problems should also diminish. Like prolapse, UI is a dynamic mechanical condition. Neither problem inevitably worsens.

With age, inactivity, and sometimes disease, muscles throughout your body may become flabby, weak, and unable to support your body structures. The muscles of your pelvic floor are no exception. Pelvic muscle weakness can result in incontinence (an inability to control your bladder or bowels) and/or prolapse (the dropping of the uterus, the bladder, and/or the rectum within the vagina or past the vaginal opening). Vaginal vault prolapse is the descent of the top of the vagina, which typically occurs after a woman has had a hysterectomy.156 Prolapse may be caused by inadequate muscle tone. This usually results from childbirth, but there may be other causes.

Pelvic organ prolapse generates between 200,000 and 300,000 inpatient surgical procedures annually in the United States.106, 165, 566 The Pelvic Organ Prolapse Quantification System that was developed in 1996 by the International Continence Society provides a uniform method of scoring the degree of prolapse in order to monitor change in the condition. Table 6.1 lists the stages, which are defined by how protruded (beyond the vaginal hymeneal ring) the leading edge appears on examination.

Notice that the degree can range from invisible to visible. If you’re assessed with one stage, though, it may not get worse. According to Dr. Anne Weber, prolapse is dynamic, rather than progressive. In fact, it often regresses.823 In other words, you can have the condition one year and not the next.92 Obesity is one of the few modifiable risk factors that have been identified as a cause. As usual, it helps to watch your weight.

Prolapse: Fairly Common, but Not Deadly

No populationwide data have been gathered in the United States, but investigators estimate that 30 to 93 percent of mobile women will experience prolapse.566

Examinations of 270 Iowa participants in the Women’s Health Initiative Study revealed that 65.2 percent were at least at stage II or beyond and 25.6 percent had the leading edge of internal structures protruding outside the vagina. The investigators concluded that pelvic organ prolapse is common and some degree of prolapse is normal, especially in women in their mid 60s.566 Neither hormone therapy, the number of pregnancies, nor vaginal delivery were associated with the occurrence of prolapse. But for women who did have prolapse, those with more than two vaginally delivered babies were more likely to experience further descent over time.92 Those most at risk were in poor health status overall.652 African American women have less than half the risk of Caucasians.

What Is the Cause of Prolapse?

There are theories, including a stretching of the vaginal tissue, the thinning of tissue, aging with estrogen deficiency at menopause, and breaks in the fascia of the vagina. But the theories have not been supported by facts.824 Very little is known about the physical and biological manifestations of prolapse. A potential cure at the molecular level appears unlikely.526

The majority of women who undergo pelvic floor reconstructive surgeries have previously had hysterectomies in each of the studies that list prior surgeries.709 Possibly, surgical removal of the uterus further weakens the supporting structures that are needed to hold the pelvic anatomy in place.

Do you need to do anything about prolapse? It really depends on you. Although some authors state that women with prolapse suffer from chronic pelvic pain and pressure, urinary and fecal incontinence, sexual dysfunction and social isolation,526 other experts assert that pelvic pain is not associated with prolapse and, frequently, prolapse is not a problem that requires surgery.823 A stage IV prolapse with internal structures protruding outside the body will obviously be a problem, as well as a medical emergency if the woman is unable to urinate. Fortunately, this is relatively rare,823 occurring in less than 7 percent of women.652 Moreover, the actions you take with stage II or III prolapse may prevent the further descent of the prolapse.

There is no inevitability that the problem will worsen, and prolapse does not demand treatment (or surgery) unless you are currently suffering.