Forty-three perimenopausal women kept daily records of menstrual cycles and sexual activity. Data on hot flashes and plasma estradiol and testosterone levels were obtained at two points during the menopausal transition. The prospective data yielded a significant negative association between hot flash ratings and regularity of sexual intercourse at both time points. A significant negative correlation was found between estradiol (in the early part of the cycle) and hot flashes ratings at the first data point only, and positive correlations were found between hot flashes and ratio of testosterone to estradiol (T/E) at both. Frequency of sexual intercourse and level of plasma estradiol were higher, and T/E and hot flash ratings were lower in “early” perimenopausal women who were still having cycles at least once every 30 days, as compared with ”late” perimenopausal women who were cycling less often. It was concluded that a close association exists between increasing irregularity of menstrual cycles, hot flashes, declining estradiol levels, and declining frequency of intercourse during the perimenopause. Causal relationships remain to be established.

The perimenopause is characterized by changes in menstrual cycle length and bleeding patterns (Treloar et al., 1967; Vollman, 1977; Metcalf, 1979; Rutherford, 1978). Associated with these changes are a variety of symptoms, the most common of which is the hot flash, which affects around 75% of women during the perimenopausal and early postmenopausal years (McKinlay and Jeffreys, 1974). Hot flashes are clearly related to decreasing estrogen levels (Chakravarti et al., 1979) and can be most effectively treated with estrogen (Gambrell, 1982).

Low frequency of sexual behavior or sporadic sexual behavior has been associated with various states of female reproductive deficiency, including aberrant menstrual cycles and luteal phase defects (Cutler et al., 1979a,b,c). However, the effects of menopause on sexuality have not been clearly delineated (Davidson et al., 1983). A Swedish survey found significant attenuation of sexual behavior in age-matched women across the menopause (Hallstrom, 1977), but others have reported a wide variety of effects (see Davidson et al., 1983), and no longitudinal studies are available. Accordingly, in our prospective study of hormones and behavior at the menopause, it seemed appropriate to investigate possible relationships between hot flashes, a symptom of hypoestrogenic states, and patters of sexual behavior. Pilot observations were obtained on 155 women who showed signs of altered cycle length and/or menstrual flow. In an open-ended questionnaire, these subjects were asked to report retrospectively on emotional, physical, or sexual changes they had experienced. Of these women, 110 provided data on sexual behavior. The results showed a clear association between hot flashes and decreased sexual activity (Cutler and Davidson, unpublished data). A prospective study was therefore conducted to clarify relationships between hot flashes, sexual behavior, and associated hormonal changes.

From an initial group of 155 volunteers recruited through announcement in public media of a “study of menopause", without mention of sexuality, 43 perimenopausal subjects were selected on the following bases: (a) they had noticed sustained changes in cycle length and menstrual flow within the last year; (b) they had not been ovariectomized or hysterectomized, and they had not taken estrogen replacement therapy; (c) they had menstruated at least once during the previous 12 months (during the study any women who was 12 months from her last cycle was considered menopausal, and data from that point on are not included in this report), (d) they had a sexual partner or partners. Characteristics of the subjects are presented in Table 1.

At a first meeting after agreeing to participate, women were briefed, gave informed consent, and received calendars for daily recording of menstrual and coital information. Women were asked to mark their calendars with a B for each day of bleeding, with an S for each day of spotting, and with one or more I's to indicate each penile-vaginal intercourse.

At approximately 3-month intervals (M = 3.0 + 0.1), the first and second interviews were conducted on days one to five from onset of menses, 20-ml blood samples were drawn, and menstrual and coital records were collected. Women who did not menstruate around the time of interview were also seen and blood samples drawn, but if such an irregularly cycling subject menstruated less than 28 days after the interview, data from that blood sample were not included in the analyses in order to exclude hormone levels from stages other than early follicular. At each interview, women completed a modified version of the Kupperman test of Menopausal Distress (Kupperman et al., 1959), which includes a rating of the incidence and severity of hot flashes or night sweats over the previous 30 days on a 0-3 point scale (non, mild, moderate, and severe). At the second interview, women were asked to rate hot flashes and night sweats separately for the previous 30 days. Nine women had dropped out of the study by the second interview: four began estrogen replacement, one became menopausal, and four declined to continue. All remaining subjects were followed for several months after the second interview in order to monitor subsequent menstrual activity. 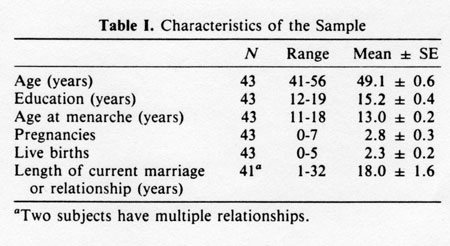 Blood samples were separated and the plasma frozen and later tested by radioimmunoassay for levels of estradiol (Wright et al., 1978) and testosterone (Frankel et al., 1975). Mean intra-assay coefficients of variation were estradiol, 9.7, and testosterone, 7.8; the interassay coefficients were 13.5 and 6.9 respectively. Statistical analysis was by the chi square test, t test, Pearson correlation coefficient, and ANOVA. All probability values presented are two-tailed.

Frequency and regularity of sexual intercourse, determined from calendar records for both 4- and 10-week periods preceding interview days, were analyzed for possible association with hot flashes over the previous 30 days (related at interview). Because so few women recorded more than one intercourse on any one day, frequency was analyzed in terms of number of days on which intercourse occurred. Regularity was determined by dividing the record into 7-day periods from the day of interview. Women were categorized as weekly if they engaged in sexual intercourse at least once every 7 days with the exception of 7-day periods in which menstruation occurred. That is, when the only 7-day periods without coitus were those in which menstruation occurred, a woman was still considered “weekly.”

Subjects not meeting this weekly criterion were labeled sporadic. Because the interviews were roughly 12 weeks apart, there were six subjects at interview 2 whose sex data for the 10-week period preceding the interview day contained one or two weeks of data also included in interview 1 data. Employing 2 x 2 contingency tables, both the 4- and 10- week analysis for each interview yielded significant associations between regularity of sexual intercourse (sporadic or weekly) and presence or absence of hot flashes and/or night sweats at interview 1 and hot flashes at interview 2 (see Fig. 1). For interview 1, chi square values were 6.31 (p < 0.05) and 4.11 (p < 0.05) for 4- and 10- week analyses, respectively. For interview 2, they were 11.57 (p < 0.001) and 15.97 (p < 0.001), respectively.

Subjects were divided into two groups on the basis of cycle status obtained from the calendar records. Women who were cycling at least once every 30 days at time of interview were designated early perimenopausal and those cycling less than once every 30 days, late perimenopausal. Analyses for estradiol, testosterone, T/E, hot flash rating, and number of days with sexual intercourse for both the 4-week and 10-week periods were carried out using a 2 (cycle status) x 2 (interview) mixed-design ANOVA. Because there were not equal numbers of early and late women, the method of unweighted means (Winer, 1971, p. 218) was used. Only women providing usable data at both interviews were included. A significant main effect of cycle status was found for all dependent measures except testosterone level. These results are presented in Table III. 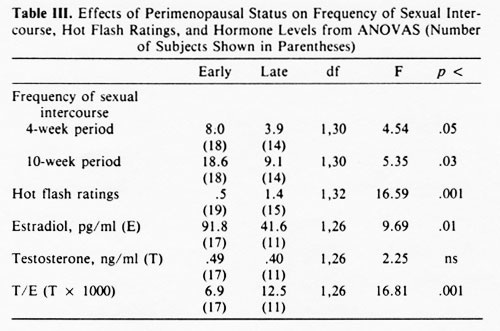 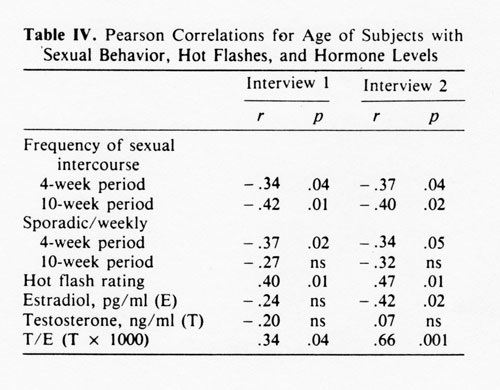 To our knowledge, this study is the first to investigate perimenopausal hormone-behavior relationships using prospective data collection. Sexual activity was negatively correlated with hot flashes in the perimenopause: (a) Perimenopausal women engaging in sexual intercourse less than once a week were more likely to have hot flashes than those engaging in regular weekly intercourse. (b) Frequency of sexual intercourse was negatively correlated with level of hot flash rating, the trend being consistent though significant only at the second interview.

The comparison between women cycling every 30 days (early perimenopausal) with those cycling less frequently (late perimenopausal) revealed the expected difference in hormone levels and hot flash ratings, with estradiol levels significantly lower and T/E and hot flash ratings significantly higher in the late perimionpausal women. The fact that T/E significantly increased from the first to the second interview for late women, but showed no change for early women, probably reflects the progression of late women toward the low estradiol levels seen with cessation of cycling. The significantly lower rate of sexual intercourse for late as compared with early perimenopausal women is consistent with the significant negative associations obtained between hot flash ratings and both rate and regularity of sexual intercourse. Decreased frequency of sexual intercourse in postmenopausal as compared with premenopausal women of similar age has been reported in cross-sectional studies (see Introduction). The present results suggest that this change occurs already in the perimenopause as cycles become more irregular. Hallstrom's (1977) cross-sectional data can be interpreted as supporting the same conclusion.

The fact that age was significantly correlated with the majority of our measures reflects the fact that, within the age span of our subjects, age and menopausal status are highly correlated. If we look, for example, at the decreased frequency of sexual intercourse for late as contrasted with early perimenopausal women, we would not interpret that finding as indicating the process of general aging (since the mean difference between early and late women was only 5 years); rather, age here represents the advance of the menopausal process, which has far-reaching and rapid effects on the organism.

What is the possible meaning of the associations between hot flashes and regularity of sexual intercourse? First, sexual interest and enjoyment may be enhanced in conditions of physical and mental well-being, and a woman suffering severe discomfort from hot flashes and associated symptoms might therefore manifest a low level of sexual activity. Second, regular sexual activity might protect against hot flashes. The possibility that coitus might induce gonadotropin and steroid release in women has long been debated (Jochle, 1973), though it's not yet substantiated but regular sexual activity might in some way affect the decline in circulating estrogen levels occurring during the perimenopause. Previous studies have shown a positive relationship between sporadicity of sexual activity and incidence of infertile-type cycles (Cutler et al., 1979b, c) and between late onset of sexual activity and gynecologic pathology in later life (Cutler et al., 1979a). These findings are consistent with the possibility that weekly sexual activity might attenuate reproductive endocrine decline by contributing to optimal gonadotropin and steroid output.

A third interpretation is that both hot flashes and reduced frequency of sexual intercourse are the result of some common third variable associated with menopause. That third variable could be perimenopausal hypoestrogenicity, which could give rise independently to hot flashes and to lowered sexual interest and activity. More frequent hormone determinations may be necessary to reveal clearly a parallel relationship between changes in hormone levels and sexual behavior in the perimenopause.

ACKNOWLEDGEMENT
We acknowledge the assistance of Dr. Paul Eskildsen, San Francisco State University, in the data analysis, and the technical help of Brenda Siddall. Antisera were supplied by Drs. B. Caldwell and G.D. Niswender.